This will be a year where there will be great opportunities for the body of Christ. Father God will bring great blessing to the church in every area of endeavor as she prepares for the work which He has ordained for her to accomplish. He is bringing the body and the Kingdom to the forefront of society so that there will be a definite distinction that the world can see. The distinction between the kingdom of Christ Jesus and the world will be shown in a greater light than ever before.

The enemy is working feverishly to destroy the influence of the kingdom of God in all societies and in all the earth. He is warring to destroy and remove the kingdom of God from mankind. He is attacking the church in an all-out effort to emasculate the body of Ghrist and to remove it from the minds of people. He wants the church to have no influence in mankind's affairs so that he (the devil) might influence the world to remove itself from the hand of God.

The enemy's attacks against the church and its people will become more direct and aggressive in this year. He will move to bring those who are actively seeking Him into a closer and more intimate walk with Him! The people of God must draw ever nearer to Him and to the leadership of the Holy Spirit! We must hear His heart beat and know His desire for each individual and for the church of Jesus Christ. We must strengthen our resolve and strive to grow in faith to work for His kingdom to be established. We must determine to grow in His grace and in His wisdom. These will be needed, along with faith, to fight the war which is coming and which is even upon us at this time!

And there will also be a fresh outpouring of His power to do the things which He directs. This power will strengthen each individual and each body of believers to overcome in every situation and in every event. We will see miraculous events as we are obedient to His voice and His call upon our lives.

The Lord is bringing forth the church of Jesus Christ and His kingdom in all of her glory through the things which will occur this year! We, as the followers of Jesus Christ, must endeavor to hold true and faithful in the coming year as the battle will be difficult but the victory will be mighty for the glory of the Lord Jesus Christ!

Jesus told the disciples who He was and what was going to happen to Him. However, their own desires and expectations influenced what they "heard." I believe Jesus is telling us not to do the same thing. Things in the near future are going to be happening quickly. Before we can adjust to that, another surprising thing will occur. Our trust must be in HIM and not in our expectations of how things will be happening. Don't limit our expectations by our own imaginations! God will be working in unexpected ways! Open your spiritual ears and eyes to Him and trust Him through it all. 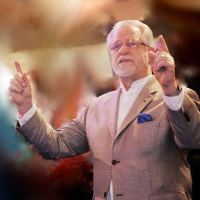